Titansgrave: The Ashes of Valkana is a series on Geek and Sundry depicting the gameplay of Wil Wheaton’s new RPG of the same title, where he leads four celebrity role players and their characters through the adventures of Valkana.

Valkana is the world where this takes place and, as it says on the Geek and Sundry website, Valkana is ” a world far from our own where goblins wield laser rifles, dragons destroy hovercrafts, and great war machines plunder the land. The world of Valkana has been at peace, but that is about to taken from the land from an ancient evil that has begun to stir.”

The adventurers are a mix and match of characters who have found their way together and are all in search of different things, but must work together in order to find what they are looking for. They also have secrets from each other, that the game master (Wil Wheaton) may or may not reveal during the adventure. The characters are as follows:

Aankia: Aankia is a Saurian reformer who lost her father, a street performer with robotics, in a traffic accident. Her main goal is to discover who killed her father and get vengeance. She is accompanied by Jeremy, a robot she rebuilt from her father’s set.

S’lethkk: S’lethkk is a half orc- half Saurian mage who was bullied by the Saurian children, who locked him inside a chapel where he found old religious text, which is how he learned magic. S’lethkk has an orc brother, who he hasn’t seen for awhile, and his short term goal is to find his brother and mend their relationship.

Kiliel: Kiliel is a half elf- half dwarf, whose biological mother is an elf and, while her non-biological elf father was gone, she had an affair with a dwarf and conceived Kiliel. Her elf parents own a relics shop, and she goes with the group to travel, collect relics, and find her dwarf father.

Lemley: Lemley is a 17-year-old orphan human who was found by a Saurian couple who took her in. When she was working with technology unknown to her, she caused an explosion, killing her Saurian parents, and removing her arm and leg, which she replaced with cyborg limbs. She built a sword into her arm that she named Dr. Lobotomy.  The only item she has from her human parents is a locket with a symbol resembling the number 3 on it. 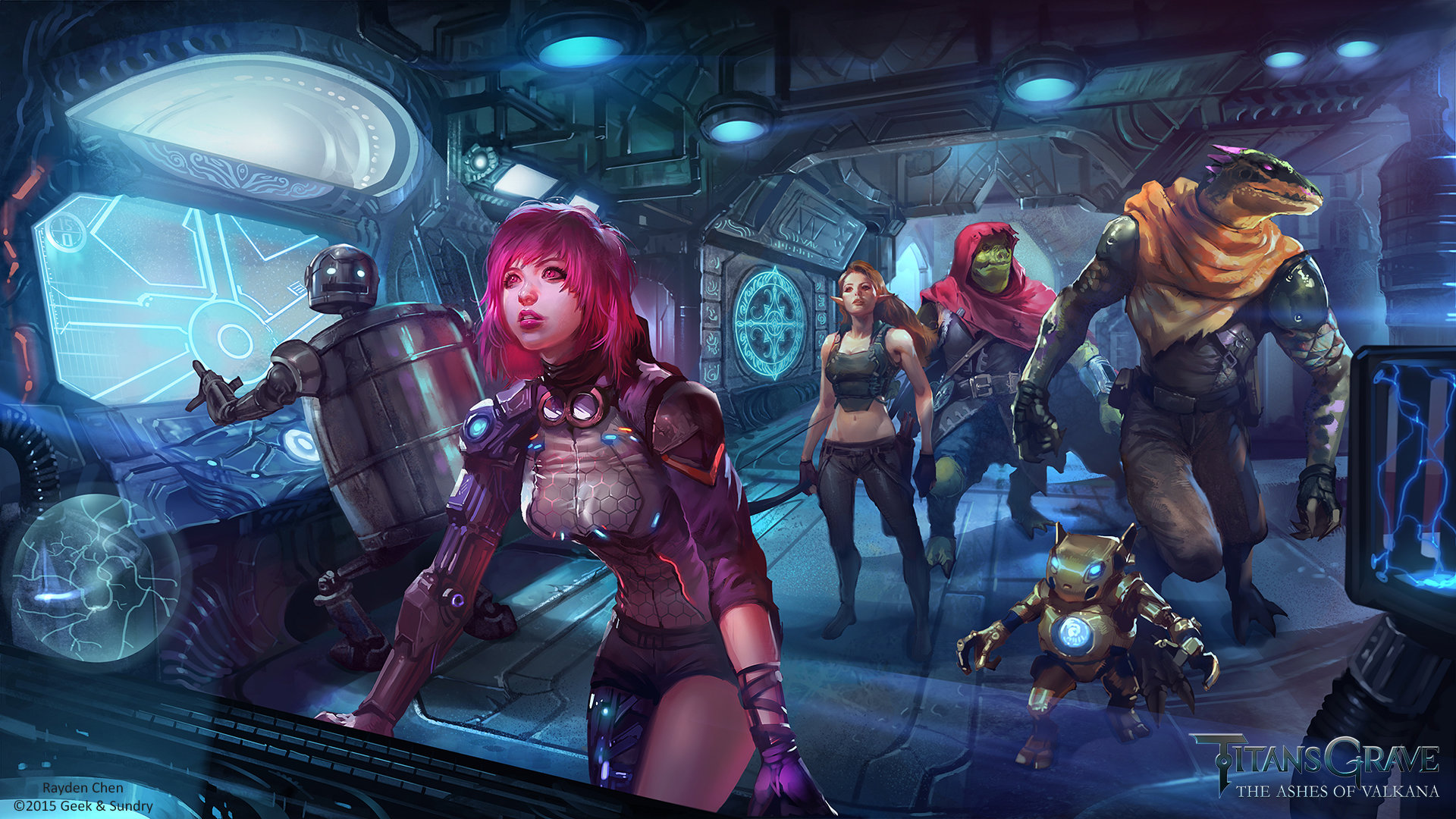 All of the characters have secrets, that the game master may or may not reveal throughout the story. I will not share these secrets, because I want you all to watch the series and find them out yourself. They all have goals they want to achieve, but how they are done may surprise you.

The heroes battle thieves, monsters, cyborgs, and more in this magical dystopian universe, where rewards are earned by eccentric characters, but not all people are what they seem.

I highly enjoy this series for many different reasons. First off, the story is fascinating, and how Wil Wheaton weaves in their secrets and goals is almost effortless. Also, the artwork (as shown above) is phenomenal, and the group of people who do it are great at their job. Thirdly, even though I am not an RPG player, I enjoy the game play on a whole, and it is very easy to follow. Lastly, it’s better than television. I really do not watch any TV anymore because I just watch internet content, and Titansgrave is great quality content. Wil Wheaton himself has said “I told the cast and the creative people involved with Titansgrave that I was hoping to create a story together that would end up giving us 10 episodes of dramatic, engaging, challenging, and entertaining television that would rival the scripted dramas we all love. So far, I feel like we’re doing a good job getting close to that goal.”

Titansgrave has new episodes on the Geek and Sundry website on Tuesdays, and on Youtube on Fridays. The first episode, in which game play is instructed, secrets are confessed, and stories are told can be watched here. Although the first season is over, Geek and Sundry announced a second season.

One thought on “What to Watch: Titansgrave”