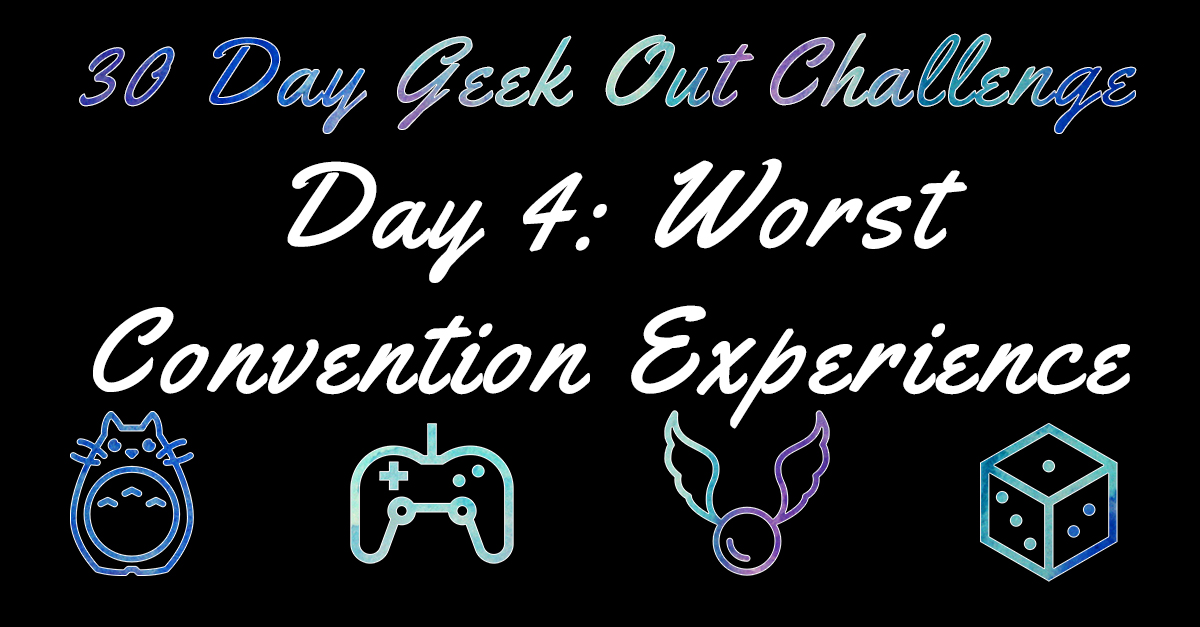 Yesterday we talked about my favorite con experience, and for today we are talking about my least favorite.

Just as a reminder, the 30 Day Geek Out Challenge is all about what makes you geeky, from fandoms to hobbies, favorite characters and more. I’m going to do this challenge along with my regular schedule of posts, so there will be tons of content from me this month! Thanks to Megan at A Geeky Gal for creating this!

The question today is: What was your worst convention experience?

Backstory: I started watching Twitch towards the end of 2015 after I had really started getting into watching gaming content on YouTube. So I started watching streamers, mainly ones that had YouTube channels I enjoyed. And through those streams, I found new streams. I found one streamer in particular, who shall remain nameless, and started to really bond with the community. This is when the streamer decided to really push for partnership on Twitch, so that was a big deal to him and the community. I genuinely really enjoyed the community there and met my best friend through that community.

At some point, I don’t really remember when, I got modded in that community. It was my first time being a mod, I was excited because I really loved the community and getting to be a special member of it was an honor to me. That is when I decided to go to Twitch Con in 2016. But things changed, and my relationship with the other mods and the streamer was starting to get strained because of that obsessive partner push as well as moderator favoritism.

Also, this was during my final semester of my undergrad. I was working two jobs, a full-time student, and decided one month before Twitch Con that I was going to take the Graduate Readiness Exam (GRE) the day before flying to Twitch Con. My mental health was at an all-time low. So I was doing all of that and still trying to be a good moderator because I appreciated the community so much.

Now I’ll get into the actual convention. My main purpose of going was to spend time with the streamer and other community members. While there were some things I wanted to do outside of that, my main point was to see them. And oh how a waste of energy that became.

The streamer spent all of his time networking and trying to make friends with larger streamers or playing games at a specific booth. And I definitely got the vibe from the other mods that were there that they really didn’t want to spend time with me outside of following the streamer around like an awkward fan club or watching him play games at booths. They would neglect to tell me things were happening, like a big dinner with a bunch of people or just ditch me at certain points. The people who ran the community that I cherished turned their backs on me and that was irritating.

After the convention, I basically fell out of the community. I didn’t feel welcome anymore and so did so many others that were there before the streamer made partnership. I would still show up when I could since I was a mod, but I prioritized myself and other streams that were more welcoming to me. Eventually, when I had my 2017 job that made me travel all summer long, I was unmodded in his stream and I haven’t been back since.

Thankfully I now have communities I feel more welcomed in, I still have my best friend cause she always has my back, and I still made the best with what I could at that convention. I went to great panels, watched the cosplay contest, and enjoyed the party by myself. I wrote about going to Twitch Con that year, although read it with a grain of salt after reading this post.

Moral of the story is don’t let people take advantage of your kindness and make sure that the care and respect are mutual. And if things don’t work out like you thought they would, make your own fun and do what you want to do.

If you are looking to read some more schadenfreude posts, check of A Geeky Gal’s worst con experience post.