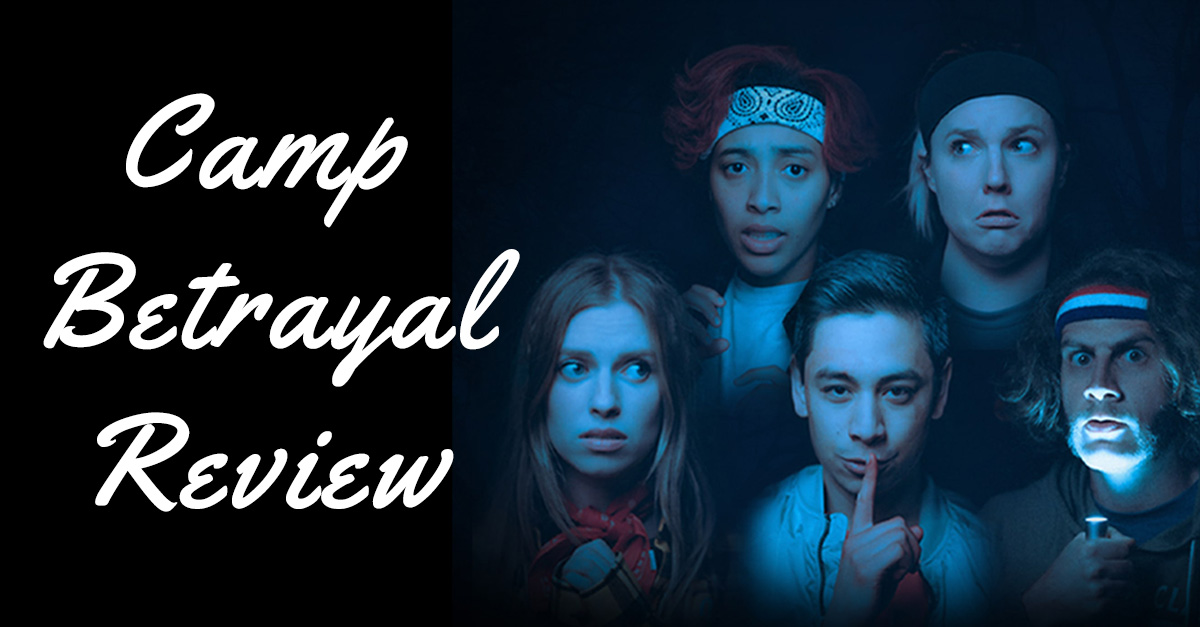 Camp Betrayal is a horror-comedy-reality competition show from Rooster Teeth that released earlier this year. Nine players will compete in horror-themed challenges, trying to win as a team. However there are saboteurs amongst them wanting the team to fail so they can hopefully send one of their competitors home. I watched the full first season and had some thoughts that I wanted to share.

This is not a fully spoiler free review. The episodes are not spoiled directly, but some critique does discuss the outcomes of the show.

To elaborate on the premise, each episode has a challenge that the team must complete. Afterwards there is a vote to send someone home, preferably a saboteur if you’re an innocent minion and the opposite for saboteurs. The saboteurs change for each challenge and they want to team to fail because when the team fails everyone is able to be voted out. And if the team wins, only saboteurs can be sent home by the vote. The last player standing wins it all in the end.

The games themselves are pretty good, with some challenge but nothing too bad that it would be impossible for the team to win if they had no saboteurs. However, the saboteurs being sneaky to screw up the team adds to the challenge as well. Each game has unique objectives so time was clearly put into these ideas which I appreciate.

There were apparently some viewers who complained that the games were too hard, but they definitely aren’t. What makes it hard is the sabotage, but mostly that these contestants were terrible with their teamwork most of the time. The games are not hard, the contestants are bad. I know that sounds harsh, but since all the contestants were focusing on the entertainment side versus the competition, it led to some avoidable moments and made a saboteurs job easier. If they decided to ease the games, they should lessen the number of saboteurs, not change the games.

As for the other parts of the show, they can use some work. Having rotating saboteurs is messy when it comes to execution and the voting period. And I was often asking myself how does someone win this show? And in the end, I still don’t understand why the person that won, won. They did very little throughout it all and it just felt like the final vote wasn’t executed well. I’d even argue the voting panel for the finale weren’t all on the same page with how they were supposed to vote. It’s a rather disappointing ending for a show with potential.

I do want more of this show, but it needs fixing. I have a few ideas of how they could resolve the issues, one being having a new batch of contestants each episode with one saboteur with the voting options being if they vote the saboteurs out, the team wins, and if they fail to vote them out, the saboteur wins. They could also embrace the setup of an older competition show called The Mole. In The Mole, one player is always the saboteur and working to secretly prevent the team from winning the games, and thus winning more money for the winners pot in the end. After the challenge, all contestants take a quiz about the saboteur and whoever gets the least correct that episode is sent home. It is a much cleaner set up, but it doesn’t fully fit the original concept of the show admittedly. But structure wise, it would be a good place to build off of for a better competition.

Overall I enjoyed Camp Betrayal. It was definitely more comedy focused than anything else, which made it amusing. But the competition was flawed, so if you want to watch for that solely, I wouldn’t recommend it. If you want a laugh with a side of competition, give it a watch.

Do you enjoy competition shows? Tell me your favorite in a comment below!

One thought on “Camp Betrayal Review”