I did a review of Superfight a while ago, and the game has expanded a lot since then, so here is a review of the expansion packs.

There are themes expansions that add more characters and attributes based on a theme. Shown above is the Nerd Expansion, where it makes references to video games, movies, TV, and more. Other expansions include Anime, Rated R, Kid-Friendly, and Walking Dead. These expansions are really great for making it possible to play with more people, because the starter set is not all that big. 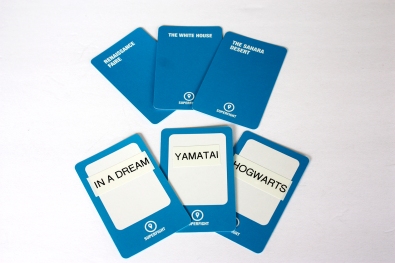 There are three other expansion that give the game a twist of difficulty: locations, challenges, and scenarios.

Locations (aka The Blue Deck) are just that, they give the fight a location. So instead of a typical city of skyscrapers, you could be in Narnia or Godzilla’s Stomach. This can either benefit you or hurt you.

Challenges (The Yellow Deck) changes the battle so it may not exactly be a fight anymore. Instead, it could be an old fashioned pistol duel or a cheerleading competition.

Scenarios (The Purple Deck) is best described as attributes that affect all players. It can include all fighters are riding something or all attributes removed from the fight. It can spice up the game with some extra randomness, which makes the game so fun.

My best recommendations for playing these expansions is to play them after players pick their fighters, that way it’s a little more chaotic and a surprise to them. You could also have a location pulled first, and the challenge and scenario after. You definitely want the element surprise to play a role.

And for all expansions are blank cards so you can have fun making your own!

Did you know there is a digital version of this game? Read my review of it.

What expansion do you want to play? Let me know in the comments.