Array is a color card game where your goal is to be the first to get rid of all of your cards. I’ve actually owned this game for quite awhile but realized I never wrote a review so here we go! 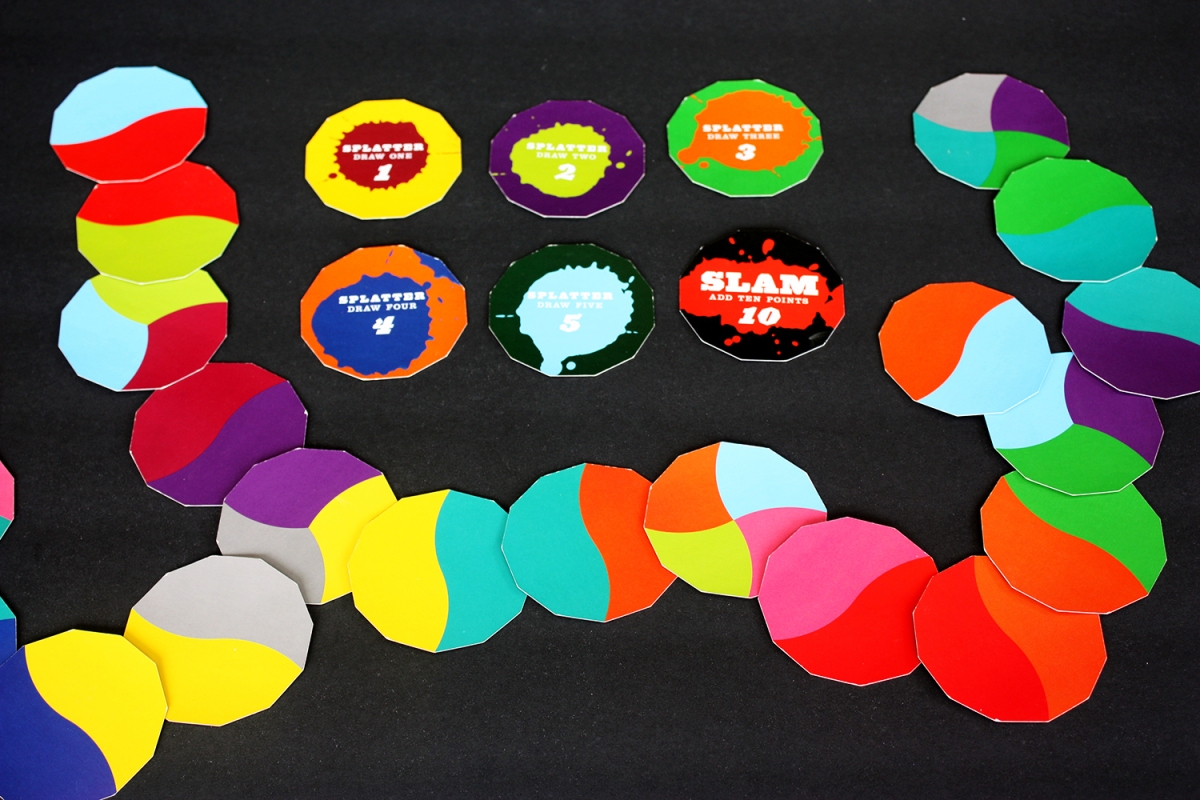 There are two types of cards in this game. The first is the color playing cards, with either 2, 3, or 4 colors on a single card. You use these to create the connections, called arrays, which are trains of cards that connect via matching colors. Purple connects to purple, yellow to yellow, teal to teal, and so on. The second type of cards are actions called Splatter and Slam. Splatters make other players draw cards based on the number on the card. Slams add points to players. The player with the lowest number of points at the end of the game wins. Basically, this game is a mix of Uno and Dominos.

Your hand starts with 7 cards. There is a draw deck, and the top card of the draw deck becomes the starting card. The starting player wants to play as many cards they can and start making arrays. Play continues till someone plays all of their cards. Playing a Splatter or Slam is a full turn. There are a couple different plays you can make. You can continue building on an existing array, which is called a splice. You can perform a slice, which is separating an array and creating 2 new arrays, but you have to play on both of the new arrays where you sliced them. For example, you slice at a green connection, so you have to play a green card on both ends of the slice. Playing a Splatter or Slam is a play. And if you cannot do any of the above, you draw a card and add it to your hand.

Once someone plays all of the cards in their hand, everyone tallies up the points that are left in their hand. There is a point breakdown in the instruction book to make it easy. The last person to be under 100 points is the winner of the full game.

Once you get the hang of this game, it’s really fun. It takes more strategy and is generally a slower paced game, where time isn’t a factor. You could definitely make a house rule with a timer to speed up rounds if that suits your fancy. The one house rule I added was playing a two player game, after we play our turn we draw a card. It makes the game last a touch longer than it would without the rule. This game is easy enough to teach to others that it’s great for a wide range of ages and abilities also. And, like I said before, I’ve played it a lot so it’s definitely a replayable game.

What colorful games are your favorite? Let me know with a comment below!