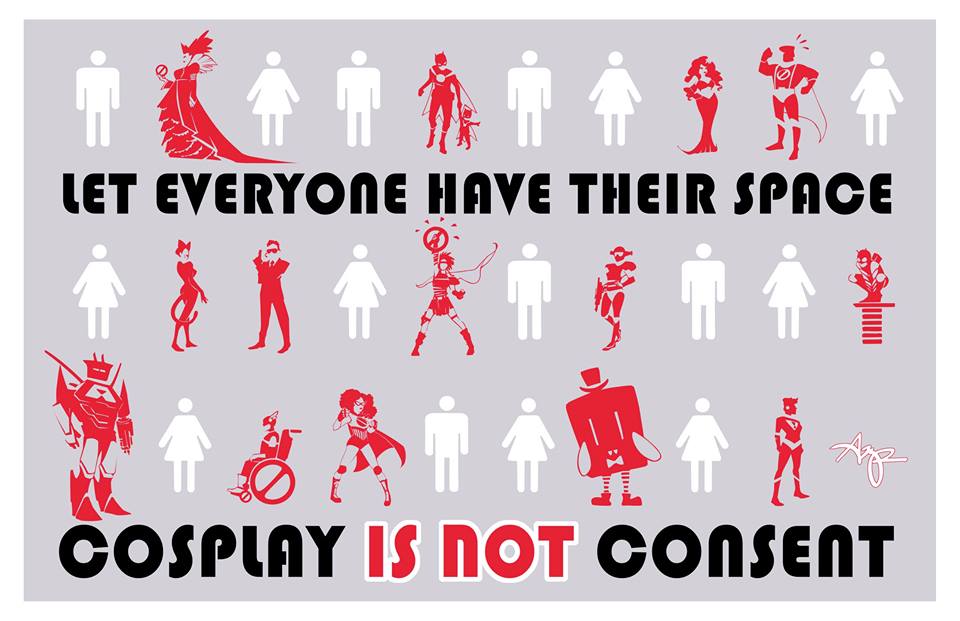 This weekend is New York Comic Con, and one thing that is bound to be seen is cosplayers and their costumed identities. An issue that still affects cons today is the harassment of cosplayer, and I want to make it blatantly clear that cosplaying does not mean consent.

Unfortunately, many cosplayers experience inappropriate questions, comments, and touching while trying to enjoy the convention because disgusting people can’t keep their mouths shut, thoughts clean or hands to themselves. Women face these issues constantly, because many female characters are hypersexualized, and cosplayers go for authenticity. But cosplayers are still people who do not deserve or appreciate the unsolicited photos, feelings, and words of the creepy attendees.

New York Comic Con started the Cosplay is Not Consent campaign in 2014, with signs all over the convention, and cosplayers holding signs themselves. Buzzfeed attended this last SDCC and spoke with female cosplayers about the different and disturbing things people have said to them, often about their desire to have sex with them as the character and often when it’s an underage cosplayer.

I hope I only have to say this once, CLOTHING WILL NEVER JUSTIFY UNSOLICITED, SEXUAL COMMENTS OR ACTIONS. Whether it is cosplaying or an everyday outfit, NEVER EVER make comments or actions that are undesired. Cosplayers are not inviting you to photograph them sexual, pornify the photos, or saying your dirty thoughts, ever.

All cosplayers want to do is enjoy the convention and have fun dressing up in their favorite costumes. They are happy to take photos and talk, but once your hand slips to low or you say anything that makes them uncomfortable and they do not ask for it, you have crossed a major line. Cosplayers should not have to accept this as normal in any circumstance ever.

So please, if you attend NYCC, SDCC, or other conventions where cosplaying occurs, respect the cosplayers, be polite, and look out for them. If you wouldn’t want it to happen to you, do not let it happen to them. You can read the New York Comic Con Anti-Harassment Policy here.

This post was originally featured on Look Through My Lens and has been shared with permission.