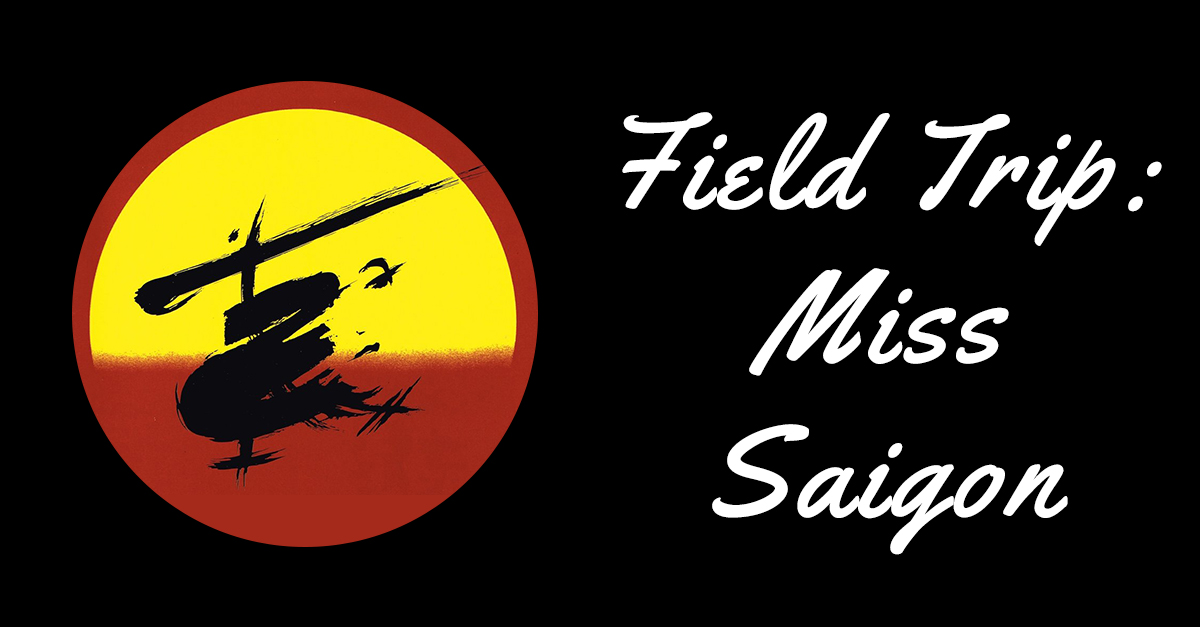 This past weekend, my brother and I went to see Miss Saigon at the Pantages in Los Angeles. We’re both musical theatre fans, and this trip was his birthday gift for the year, so I got to benefit too!

I’m going to start this off by saying yes I know Miss Saigon is controversial. I’m not going to address it further in this post cause this is more so about the experience than it is about the show itself.

For those that don’t know what Miss Saigon is about, here is a quick plot summary:

In the dangerous days before Saigon’s fall in 1975, Chris (an American GI) and Kim (a destitute Vietnamese orphan working her first night as a prostitute) fall in love. When the city falls, the lovers are forced apart, and each must find their own way, alone. When, years later, Chris is able to return to Vietnam, he brings with him an American wife. Kim, who has waited for Chris, has raised their son, Tam, who is “bui-doi”– a term for a child conceived during the horrors of war. With so much devastation behind them, Kim and Chris must decide how to move forward.

We had a little bit of time prior to the show to walk around and look at some of the stars on the Hollywood Walk of Fame. We stayed close to the Pantages so we didn’t get to venture to our favorite celebrities (which my brother and I don’t really have to begin with). We did come across some interesting ones, such as Lin-Manuel Miranda which I got excited for honestly as a Hamilton fangirl, Sir Andrew Lloyd Webber of Phantom of the Opera and many other musicals, The Beatles, the man who sang in the rain Gene Kelly, and others. There were also many, many names I did not recognize at all which is interesting.

The Pantages is a gorgeous theatre. I was in awe walking into the lobby it’s so beautiful. I am that kind of nerd that will ooh and aah at beautiful architecture, and the Pantages did not disappoint.

The show itself was amazing. I personally didn’t know a whole lot going into the show besides the synopsis. So it was the first time I have heard the music or seen any of the moments actually played out. First and foremost, the cast was incredible. Emily Bautista, who played Kim, was phenomenal. The sets, especially how they maneuvered them, was very impressive. Set pieces alone made my jaw drop, especially the famous helicopter scene. I definitely got very choked up when Kim says goodbye to her son. They did not disappoint with this show at all.

Miss Saigon is definitely not your fun and catchy musical in the slightest, so if that is what you want from a musical theatre experience, Miss Saigon is not a good choice. It was created by the same people who made Les Miserables, so you can see they enjoy making dramatic and depressing shows. But, Miss Saigon is a stunning show and it was amazing to see it done at one of the most professional levels it possibly could be done.

My brother and I are already talking about future shows to see at the Pantages, and in LA in general. I have my eye on Hamilton in March 2020 and my brother wants to see The Band’s Visit in July 2020.

What show would you want to see professionally done? Let me know with a comment!