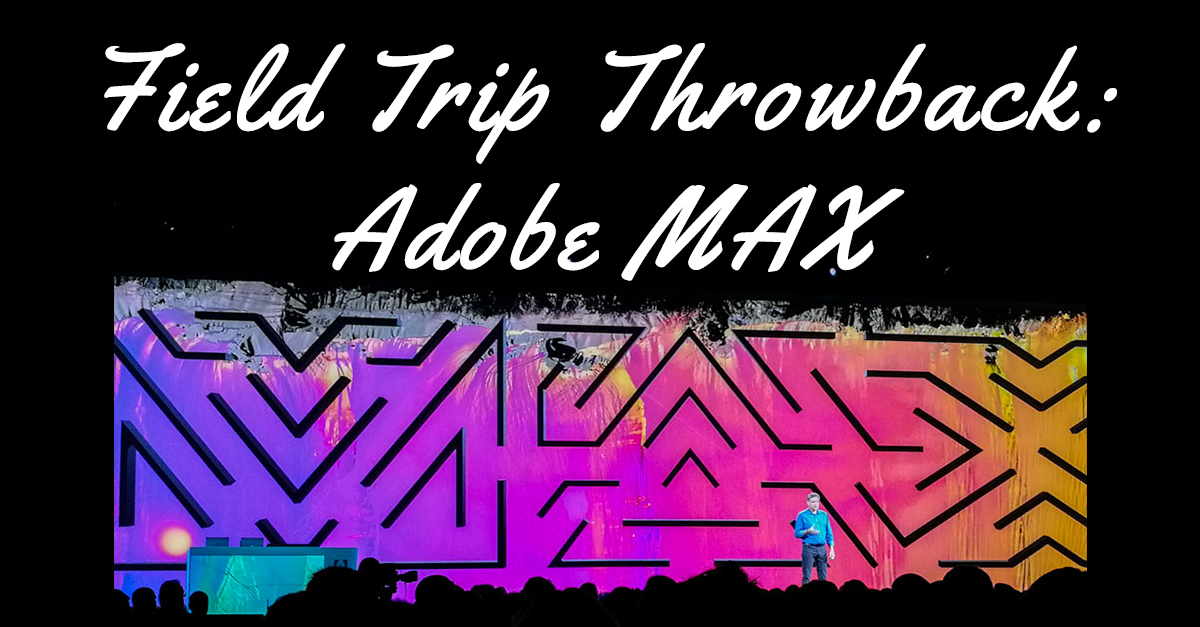 A while back I was going through some things and released there are some events and experiences I have done that I never wrote about for some reason. So I asked if people would be interested in some throwback Field Trips and you all said sure! So today, I am throwing back to 2017 when I attended Adobe MAX.

Adobe MAX, also known as The Creativity Conference, is a professional event held by Adobe that covers any and all things creative. I attended in 2017 during my master’s degree since I was learning web design and because I do a variety of other creative mediums too. I watched the 2016 keynote live online and that is when I decided I had to go and attend it myself.

Although I had attended a few other conferences prior to this one, MAX was unlike anything else. The first big difference is that we were fed as attendees. We got breakfast on the first day and lunch every day of the conference. I’ve never been to an event that was entirely catered so that was cool.

There were aspects that reminded me more of a convention than a conference. There were tons and tons of people for starters, there was an expo hall with different booths and vendors for various businesses. I really enjoyed the expo hall because there were a ton of cool, artistic additions. And a ton of free stuff. I got free t-shirts and artwork, amongst the typical promotional stuff. From Adobe themselves I got a hoodie as a gift for attending.

There was a shore for Adobe MAX themed merchandise, which I did get a shirt from there. Every year the MAX logo changes and is created by a different featured artist, so knowing that really pushed me to want something with the distinct logo on it. People were also buying pillows that weren’t different Adobe software logos, like Photoshop and Illustrator, which were adorable. There were also books from various speakers which was cool.

On to the keynotes and sessions! The first day keynote is really cool and that is when they announce a ton of updates and new software and demonstrations of changes. And, because it is Adobe, the create some amazing visual effects to go along with everything. The main hall had giant screens that they could display anything on. The second day keynote had featured speakers that either gave a talk or were interviewed. These speakers included designer Jonathan Adler, National Geographic photographer Annie Griffiths, musician and record producer Mark Ronson, and director of films (including Iron Man) Jon Favreau. I enjoyed all of the different perspectives they brought to creativity and were all really interesting to listen to.

A special event, and easily the most popular, is Adobe Sneaks. At this event, a special guest host joins Adobe team members in demoing never before scene projects they are working on. It is a really humorous event and fascinating to see this super behind-the-scenes stuff. The special guest host in 2017 was the actor Kumail Nanjiani, known for his roles in Silicon Valley and The Big Sick. A comedian definitely helps bring the laughs to the event. At one point they started playing video games between demos which was hilarious.

For sessions, they fall into different tracks based on fields. I jumped around between career sessions, graphic and web design, and photography. One of my favorite sessions was Building Your Personal Brand by Stephen Gates. He is very much a no-bullshit kind of speaker who says it like it is and you both laugh and take tons of notes. There was also a session on experiential design that was fascinating. Not every session I attended was awesome, and that really ended up being driven by the speaker and how they ran their session.

The last thing I want to talk about was the party. Adobe MAX has a party that all attendees can attend and it has free food galore, entertainment of all kinds, and a ton of whimsy. It was themed around Alice in Wonderland so it was super whimsical and colorful and fun. I mainly enjoyed the desserts and the concert portion which was headlined by Saint Motel.

Overall, it was an awesome event that I should have written about when I went but past Michelle didn’t for some reason. It is an annual conference so maybe I’ll get to go back someday.  It was fun to reminisce about it and share the experience, albeit belated, with you all.

What non-geeky events have you really enjoyed? Tell me about them in the comments below!