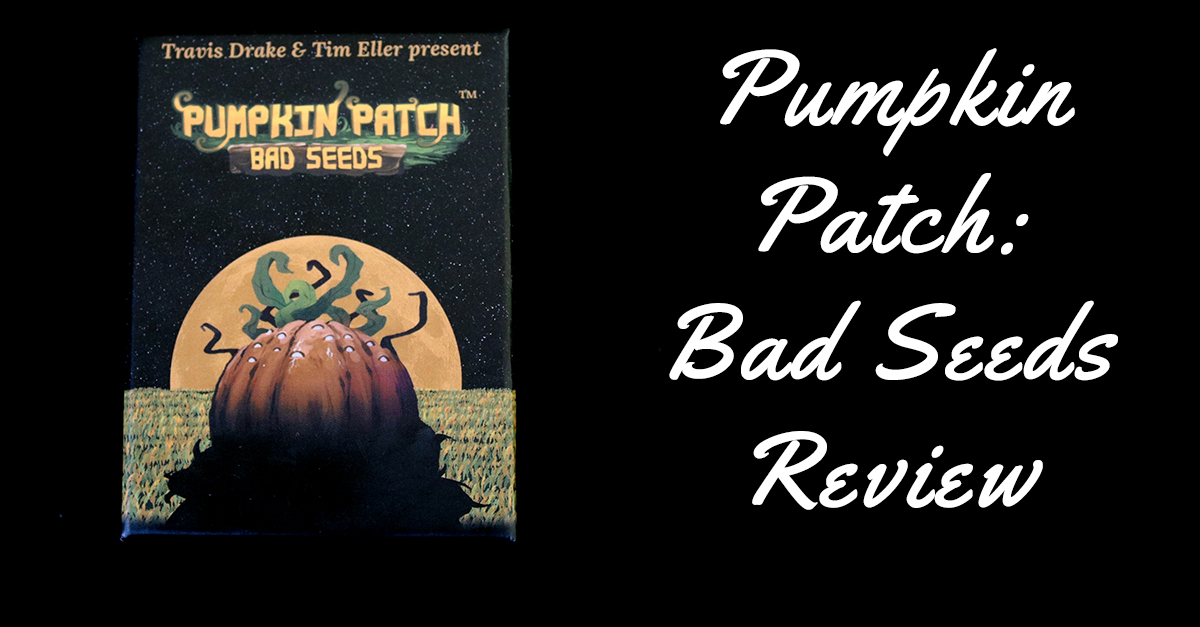 I was given an opportunity to play and review a new game, Pumpkin Patch: Bad Seeds, from Brouhaha Games. The aesthetic and theme of this game really caught my eye, but does everything else live up to that first impression?

This game was provided by the publisher for free for the purposes of this review.

In Pumpkin Patch: Bad Seeds, players plant pumpkins to create a pumpkin patch. However, not all seeds are good and now you have a patch filled with ghoulish gourds and spooky squashes.

The developer of the game describes the game as follows:

Pumpkin Patch: Bad Seeds is an ultra-portable, fast playing, strategic card placement game for 1 to 3 players. The game features easy-to-learn rules and engaging strategic gameplay in under 20 minutes. Its compact size makes it easy to put in your pocket and play anywhere!

I do really enjoy the theme. It’s spooky without being completely terrifying. The artwork is well-done and has a nice balance of grotesque and inviting. Every pumpkin is very unique in their own ways which really adds to the theming. And I do agree that it is super portable. Everything fits into a small box that can easily fit into a purse or jacket pocket. All of this considered the theme is easily my favorite part of this game overall and would be great for a Halloween game night.

Now with learning how to play. You start the game with a small patch and a compost pile.  The objective is to earn the most points, called seeds, by planting pumpkins strategically. Each pumpkin has different seed values and conditions that affect scoring. From here, each player draws 3 cards and play begins. During a turn, the player will do 4 actions. The first action is to play, either from your hand or from the compost. The second action is to move the crows. Crows block plots from being planted on, so strategic crow placement is key. The third action is to discard cards in your hand (you can choose to not discard any). And finally, you draw back up to 3 cards and your turn is done. Whoever has the most points at the end, which is caused by the Cinderella pumpkin being played, wins. 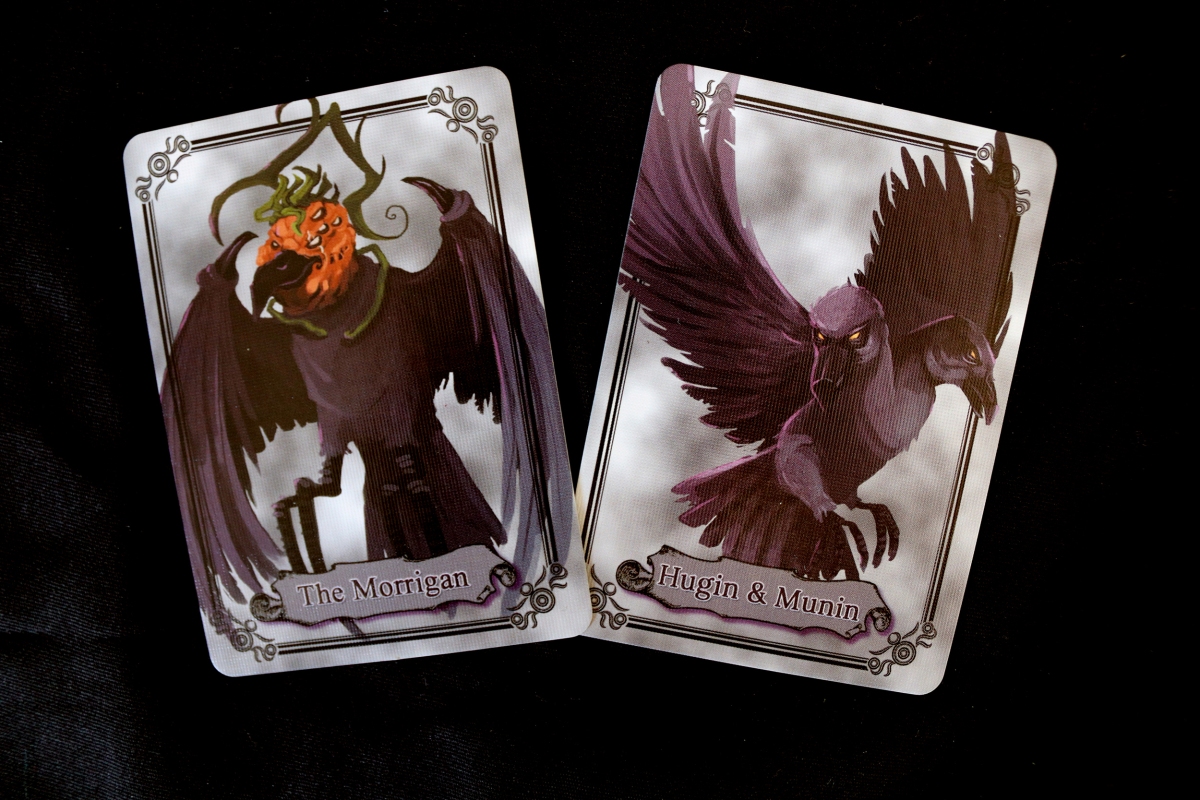 For me, and the people I played with, I would not consider the rules easy to learn at all.  While the gameplay sounds simple enough, it’s the clarifications and specifics that were foggy for us. After reading through the full rulebook, we had so many questions about things because they were not clear in the rulebook. Scoring specifically is not clear, and there is not a basic scoring description in the rulebook. They provide clarifications for specific cards, but that didn’t help our confusion with not understanding the basics of scoring.

The rulebook did have a QR code to a quick start video, and that video was much more helpful for understanding the game. If we had started with the video, and then supplemented with the rulebook it probably would be easy-to-learn. But if you only read the rulebook, chances are stuff is not going to be as clear as desired.

I specifically played the two-player version of this game, and between the two of us, it definitely took more than 20 minutes to play, especially the first time playing through. Because it is strategic, we wanted to make good choices for us. If you are more about quick decisions than sure this game wouldn’t take more than 20 minutes. So depending on how you play strategic games, this one can take more time than they say.

Once we got into the games and were actually playing it, it started to make sense. I could see how you’d want to use crows and how playing certain cards at certain times would be beneficial. However, it took so long to get to that point that I was kind of tired of the game by then.

I think the game could have used more refinement. And not really the mechanics necessarily and definitely not the theme, but the barrier they created with a confusing rulebook. It feels like they wanted to make sure the rulebook was short so they had to cut stuff out, but what they removed would probably be very helpful for clarity. Maybe the industry wants to rely more on video explanations, but I feel like that shouldn’t be an excuse for a so-so rulebook.

In my opinion, this game takes a few playthroughs to really understand how to play and then really get into the strategy of it. So it will take a few playthroughs to have games you enjoy. I don’t think your first play is going to be your best or most enjoyable. If you can get past that learning curve, you’ll probably find this replayable and an enjoyable filler to your other games. I personally did not love the game, because even after getting through the hurdles of learning it and having to learn as I played, I wasn’t enjoying the experience. And my counterpart even expressed his overall “meh” feeling of the game. This is definitely not the worst game I have ever played, but it wasn’t the best either.

I recommend watching videos explaining the rules and gameplay of this game before buying it. And read other reviews to see what others thought of it. I am merely one opinion so those videos and reviews will help you determine whether it is worth it for you in the long run. The game will cost $16 MSRP according to the Kickstarter, so do your research to determine whether it’s worth the cost.

My final thoughts: if the theme really catches your eye, do your research. If you do decide to get it, definitely play it multiple times before you judge it. The game has potential, and I think getting past the hurdles will lead to a fun game. 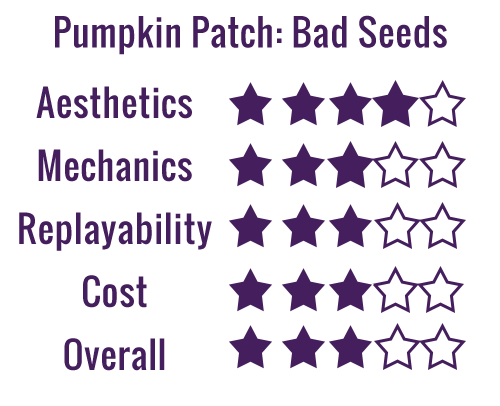