Today is a personal post for the 30 Day Geek Out Challenge as I talk about how fandoms have influenced my life.

Just as a reminder, the 30 Day Geek Out Challenge is all about what makes you geeky, from fandoms to hobbies, favorite characters and more. I’m going to do this challenge along with my regular schedule of posts, so there will be tons of content from me this month! Thanks to Megan at A Geeky Gal for creating this!

Today’s question is: How have fandoms influenced you and your life?

Being a geek has influenced me in a lot of ways. I’m pretty sure this would be an incredibly long post if I tried to list them all. So I’m going to really focus on the most influential ways fandoms and being a geek have changed me.

I have a solid 5 years of my life that was just hell. Horrible circumstances, increasingly eroding mental health, you name it. During that time I had quit the thing I was most passionate about because of harassment and basically had no other outlet aside from work and school distractions. During that time is when I started watching a lot of gaming content on YouTube and Twitch, finding new friends via communities there, and really got into gaming in general. And to this day, I find gaming to be a safe place.

Also during that 5 year trip to hell is when I started A Geek Girl’s Guide. Having left my passion that took up 90% of my brain, I was then able to enjoy some old favorites and find new geeky loves. And AGGG added a new way to destress and pull myself away from the tough times even if only momentarily.

A lot of the opportunities I have had after full embracing being a geek came after A Geek Girl’s Guide began. Mainly because AGGG opened the door to just being openly enthusiastic about the things I enjoy. And when you can just openly love what you love, the world opens other doors for you. 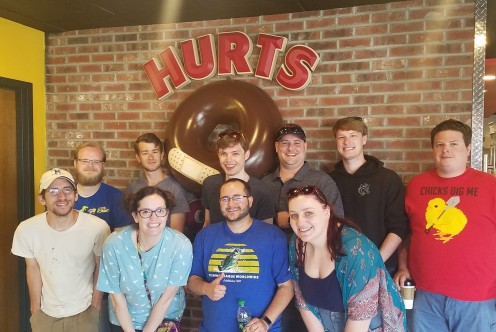 Getting into Twitch and gaming led to going to Twitch Con. Getting active in the board game community gave me the opportunity to work at PAX Unplugged. I got to visit New York City because of the friends I made online. Just being openly geeky led to adding a trip to the Wizarding World to a work trip.

And taking the things I love and writing about them has led to other creative pursuits and ideas. Most of these haven’t fully come to fruition yet, but I have a back pocket stuffed with ideas.

This slightly turned into a love letter to the blog, but the blog wouldn’t exist without fandoms.

Make sure you go an check out A Geeky Gal’s post for this question too!