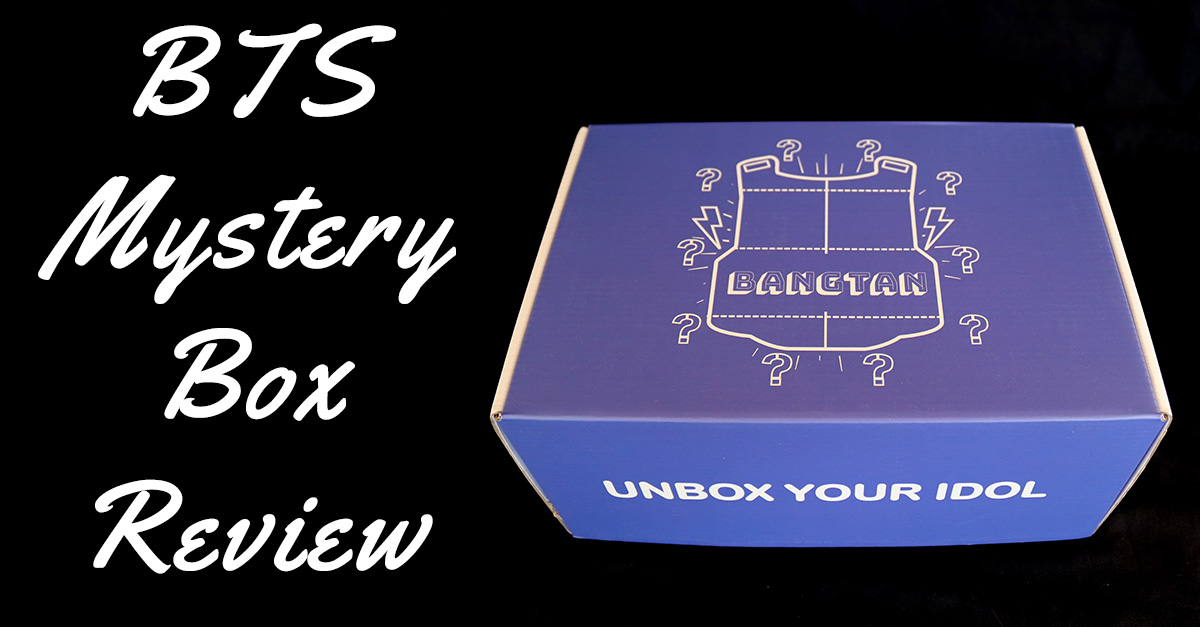 Cokodive curates this mystery box for BTS fans filled with merchandise from albums to plushes to photocards and beyond. Since I’ve fallen headfirst into becoming an ARMY, I decided I wanted one and share what I got and think of it.

For these boxes you can choose a specific bias, aka your favorite member, or have one sent at random. I could not make up my mind what to choose so I ended up getting two different ones: one being RM and the other Jimin.

Each box has a collection of goodies centered around that particular member as well as some things that are just general BTS related like albums and posters. They also include a slip you can use to identify the value of your box, but I didn’t find it helpful to actually define the value of what I got. But I also don’t necessarily care about the exact value and just whether or not I like the things I got.

Speaking of what I got, each box had an album, a large official merch item, a key chain, a ring, a poster, a button, and photo cards. Cokodive does say that some items can be fan-made, but there is plenty of official merchandise and I can’t really even tell what is and isn’t official for some stuff.

There were a couple standout items to me and some are favorites and some were surprising and noteworthy. The albums were definitely a happy surprise and I was genuinely wowed at getting the Wings album because Wings is my favorite album and era. The second album was The most beautiful moment in life pt.1. I’m glad I got this one too, while not as excited as I was for Wings, but this is the album that marks the beginning of the BTS we know and love now and where I really start liking what they do. The other thing I want to specifically mention because I had a specific reaction to it is the BTS x VT toothbrush and toothpaste. I know that collabs and endorsements is a very big part of K-Pop but I definitely was not expecting to get dental hygiene set in this box so I couldn’t help but laugh honestly. I have nothing against the item it is just more of a “wow that is random” reaction.

Once you take everything out of the box you do see truly how much you got which is more than it initial looks. However, compared to promotion photos, the box isn’t as full of stuff. But there was a lot of smaller items like the key chains, rings, and photo cards. I do wish that the box had a little more organization so it didn’t quite look like it was just a bunch of random stuff thrown into a box, but once you take everything out that doesn’t really matter. And nothing was damaged so the organization isn’t necessarily to protect anything, it would just be visually nicer.

I have to talk about the price because it wasn’t cheap, especially to get two. But I do want to clarify how Cokodive prices things because it will make more sense as to why they are expensive. One mystery box is prices at $69.95 USD. Cokodive does free shipping on everything, but they do that by essentially covering shipping cost in the item pricing. So that $69.95 is for the box and to ship it internationally, which makes it more fair.

Would I buy a mystery box again? Yes, but I would only buy one. While getting stuff for both of my biases is great, I did get some duplicate photocards which is the risk of getting multiple of the same mystery box. Plus getting more than one at a time is not cheap. I do think that with everything I got plus recognizing that shipping is included in original price, the boxes were worth it.

Have you ever gotten a mystery box before? Let me know with a comment below.