It has finally happened: Armello has made it’s way to mobile, and more specifically to Android. I’ve been waiting for this day since they first mentioned an iOS version of my favorite game. So you know I have to review the mobile version, and it has some very interesting differences between the PC version.

I want to start this off by saying this is not so much a review of the gameplay of Armello because I already did that, and more so on the adaptation of the game to mobile and what changes they made. I also am part of the beta testers for the mobile game so my version may have slight differences than if you download it but in general what I have played is what you will play.

Let’s start with the similarities, shall we? If you’ve played the PC version you will already know how the game works, what amulets and rings do, the character powers, etc. No part of the game was fundamentally changed for the mobile version which is great. We didn’t get an Armello Lite, which I love. I can play the full Armello on my phone now, which makes me a happy gamer.

Another similarity is that every day you can get a free chest from the store, and the chests contain dice you can collect and use in the game. You also earn chests by playing the game. I apparently have really good luck with these chests because I often get really good dice, and the mobile version was no different with my first chest giving me epic dice.

Now for the differences, and there are quite a few of them in ways I wasn’t expecting but I do think were needed for a mobile port.

Another thing that can affect gameplay is that the free characters offered are less than the original set you can play in the PC version. In the mobile game, you only get the 4 characters you play in the tutorial prologue (Thane, Mercucio, Amber, and Sana) versus the PC you get 8 starting characters. My main character is River, so I had to purchase her from the shop to get her. It worked out because she was part of an introductory special with shards and I had Google Play credit so wasn’t a big deal. Plus I love the game enough to buy more characters if I want to.

Another thing is the shards system, which is like an in-game currency used to buy items like dice and characters. Royals are also a version of in-game currency, but the shards are the kind you can purchase more of like many other mobile games. You do earn royals and shards by playing the game, completing achievements (or as they are called in the mobile version challenges), and and you can buy shards if you really wanted to. 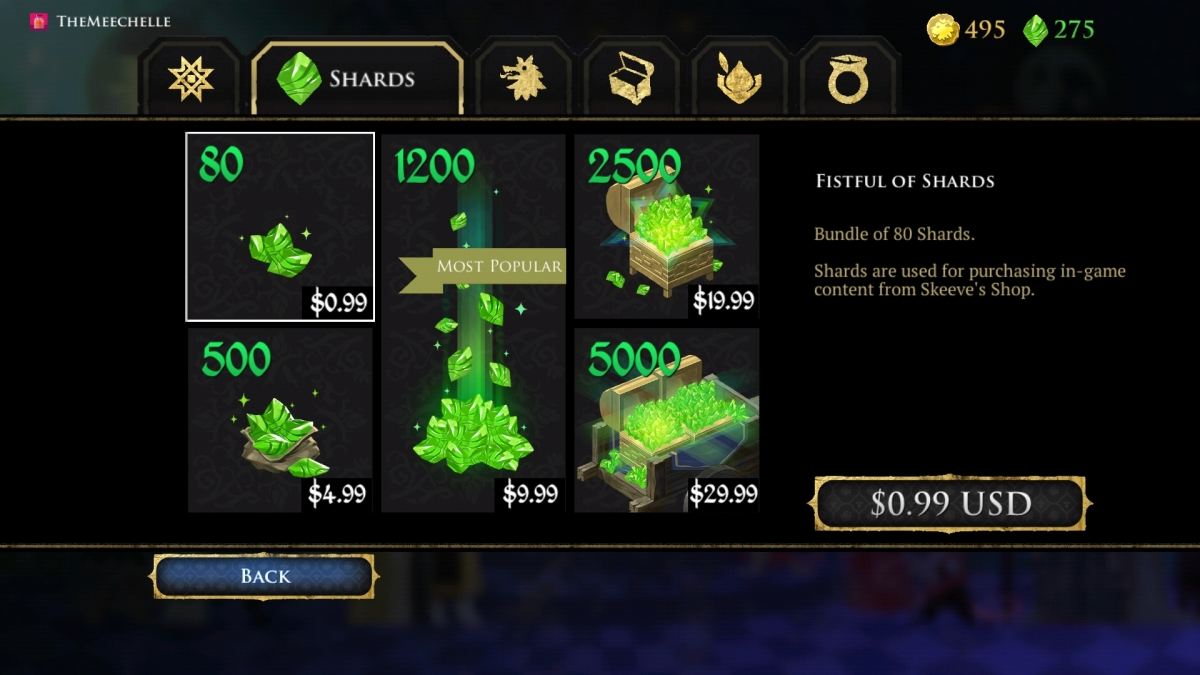 Achievements have been changed to challenges, and as you complete challenge you earn royals and shards. Challenges also include unlocking rings and amulets, which are the same requirements as the PC version. The added element of challenges works well with mobile and gives me things to work towards in game.

If you really want a specific amulet or ring though, you can buy it in the shop. This is not possible in the PC version, so I was surprised to see it here but it seems to work. I appreciate it as someone who has unlocked a lot of things in the PC version already and has a build I already like to play, so I can just go to the shop and buy the ring and amulet I need.

The first and the biggest is the fact I have all of the characters and all of my dice and hours in the PC version. The PC version is also how I play with my friends. The mobile version will be great to play when I want to play solo (there is a multiplayer option though!) and to pass time, like most of my mobile games.

The second is it doesn’t run as super smooth as the PC version. It can get jumpy cause the graphics are too much for my phone. I don’t blame League of Geeks for this cause this game is a lot for a mobile game. I just can’t appreciate the beauty of the game in the mobile version.

And last is it does drain my phone battery, so I only tend to play it when my phone is plugged in or I don’t need it. It doesn’t surprise me that it can drain the battery because it is intense for a mobile game.

I definitely recommend getting Armello mobile if you are already a fan of the game and want to play it anywhere or you have never played it but don’t have a PC or a Nintendo Switch (it’s available on the Switch now!). Definitely give it a try because it is a game worth playing no matter the platform.

Are there any games you wish had a mobile version? Let me know with a comment below.