I did a first look at Arcade Spirits recently, and that demo intrigued me enough to get the game and play it myself. Did this visual novel live up to my initial thoughts? Here is my spoiler free review.

This post contains affiliate links. Purchasing the game via these links will give me a small commission. As a refresher, Arcade Spirits is a visual novel romantic comedy set in the year 20XX of a future where the 1980s video game crash never happened and arcades are still a thriving form of entertainment. You play as a custom character who is struggling with keeping a job and their mental health until your best friend and roommate recommends you download an AI assistant app known as IRIS. IRIS proceeds to help you find a new job, which is at the Funplex Arcade, and that is where the adventure begins.

IRIS tracks Identity Identifiers, which are essentially personality traits based on the choices you make when interacting with others. This becomes important when you have super important interactions, and it limits the responses you can make based on your traits. And your choices become super vital towards the end of the story. You can choose whether or not you see what options are which identifiers, which is nice if you want to not knowingly lean to a specific trait. The integration of these traits is really well done, especially the further into the story you get and the traits you have really make a difference. 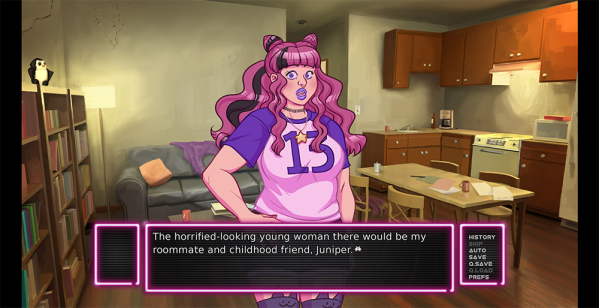 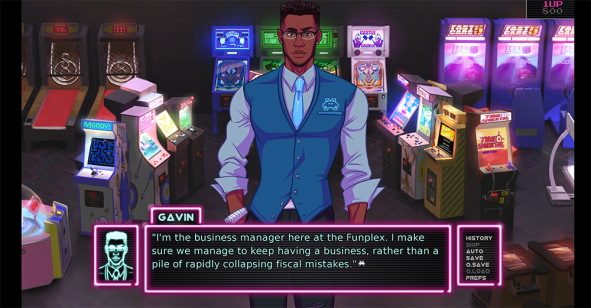 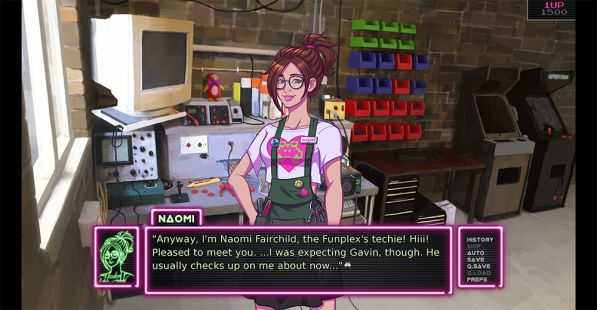 As is usual with visual novels, you have the ability to get close to specific characters based on your choices, which IRIS also tracks, and romance them. However, you can also choose to just have friendships and not go romantic, which is an addition I really like. During my playthrough, I got to the point where I really didn’t want to romance anyone and I could do that. You can specify at the start of your game what level of romancing you want to pursue and there is a point later on where you can have that opportunity as well. The best part of this game is the story. At first, you kind of wonder where this story is going but once you reach the third chapter, it really gets going. And the last half is mindblowing with certain plot points. The one part of the story I did not really enjoy is how often they brought up your characters’ family’s bad luck curse. It’s the excuse they use to explain where they can’t pursue things they are passionate about and have to settle. And while this is an interesting perspective, it is mentioned constantly and it gets exhausting after a while. Besides that, the story is quirky and comedic and overall an enjoyable story to follow. Really, this is a story about depression and working through that and the obstacles of just living life. And while there are more and more video games that look at depression and mental health, I appreciate the realism with which Arcade Spirits approaches it.

After finishing a complete playthrough, I can tell there is a lot more that I haven’t seen yet. Since I didn’t romance anyone, all of that is a mystery still. The choices really do matter, so I wonder what would happen if I made different choices. This is great because it makes the game replayable. So I just might need to put another quarter in the slot and play it again.

If you enjoy visual novels or want to give them a try, I recommend playing Arcade Spirits. The story, the geeky references, the gameplay, and the characters definitely make it worthwhile.

Arcade Spirits is available to play on Steam.

Do you have a visual novel game that you really enjoy? Share it with me in a comment below.