The Avant-Guards is a comic from BOOM! Box about Charlie, a former sports star and transfer student to the Georgia O’Keeffe College of Arts and Subtle Dramatics. While struggling to find her way around and her place among the student body, she gets recruited to the not-so-good basketball team.

I received this book free from NetGalley in exchange for an honest review.

Moving to a new school is always awkward, and this comic portrays that well. Charlie is presented as having a tough exterior when she is really just hiding her lack of comfort with everything that is happening. As she explores the campuses extracurriculars, she gets blindsided by The Avant-Guards, a fledgling school basketball team that is just one player away from becoming an official team and competing.

The Avant-Guards are essentially a group weirdos. Each character has a distinct personality, which is one of the biggest highlights of this whole comic. There is Olivia, the leader of the team with a lot of enthusiasm and can-do attitude who won’t take no for an answer. There is also Tiffany, the team’s very own witch. Ashley is the most athletic of the team, and is also noted to be a great singer and serves as the team’s coach. Nicole is a cynical and blunt type. And Jay is a nonbinary strong but silent type. This group is diverse and full of personality, which is what truly made the comic enjoyable.

Charlie, however, is not interested in returning to her basketball days based on something alluded to in her past. We learn there was a falling out at her previous college with her team, and she doesn’t want to deal with that here. She eventually gives in, and thus the Avant-Guards is official.

This comic really isn’t about basketball, but the relationships of everyone involved. This first volume really focuses on Charlie and Olivia specifically, and there potential budding more than friendship. We also get glimpses into their past, which adds to the character growth and their overall personalities.

Overall, the characters are the best part of the story thus far. They are diverse in multiple ways and all have their own distinct personality and stories. However, the overall storyline felt rushed to me in this first volume. To me, it felt like Charlie gave in a little to easy with her backstory of anxiety and panic. She was presented with such a tough exterior, I wanted her to be harder to crack. Also, for me, the Olivia and Charlie romantic relationship also happened way too quickly, particularly Charlie’s side of it. We just barely met these characters and had a single game, but already have these intense relationships and a lot of backstories presented. I know that since this is a volume it is multiple chapters put together, but it was just the first four chapters and so much already happened. 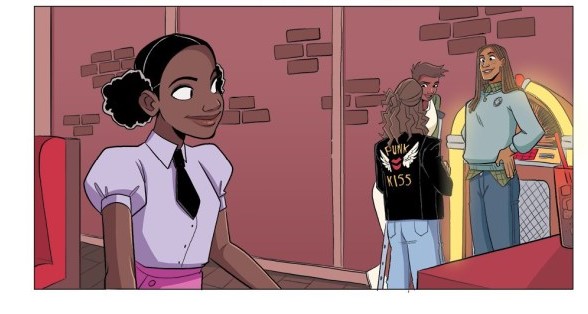 The volume did end on a cliffhanger, with the fate of the team at stake. The characters make me want to read more, despite the slight rushing of plot in my opinion. I’d definitely recommend this comic because its characters are already great and the story has its charm and intrigue, despite its small issues.

The Avant-Guards Volume 1 will release on September 3rd, 2019.